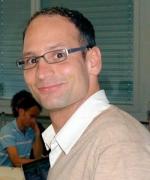 TEACHER in training - Matthias Grötzinger, after his graduation from physiotherapy academy at „Physiotherapieschule des VPT, Fellbach-Schmieden“ in 1999 he worked in a facility for biomechanics and performance diagnostics as well as in a practice for physiotherapy with focus on spinal dysfunctions in Freudenstadt.

Subsequently he was employed in Egenhausen as a senior physiotherapist in a specialized rehabilitation clinic for psychosomatics. Since 2003 he works in his own practice with focus on head-, mandibular- and face therapy, as well as chiropractic and intensive care – since 2007 in Egenhausen.

Over the whole time he participated in numerous postgraduate courses for specializing in spinal- and head therapy, e.g. manual therapy, osteopathy, chiropractic and CRAFTA®